Gabrielle Strobel at the inimitable AlzForum has a nice article about how tau imaging levels correlate more strongly with memory deficits than amyloid imaging levels in patients with AD, based on recent conference data.

In med school (read: First Aid for the USMLE S1, 2014), we also learned that tau levels correlate more strongly with memory deficits, but that was based on post-mortem neuropath, which is slightly more likely to be confounded.

I await the actual publications to get a sense of what the correlation numbers are. In postmortem neuropath exam, the correlations (r^2) are 0.74 for tau tangles and 0.50 for amyloid plaques with final MMSE, respectively. 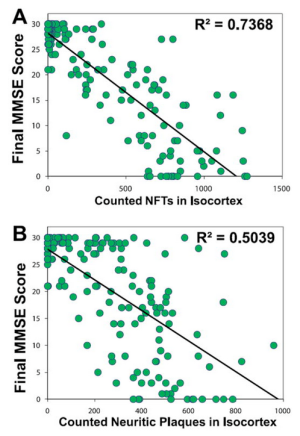 This page will be updated with links to any articles, projects, and ideas-in-progress.