Abstract: How many types of neurons are there in the human brain? What about in particular brain regions? To what extent are these useful questions? First published: 12/5/12. Last updated: 2/11/13.

To motivate the molecular details with a macroscale example, consider the number of senses in the human body. In elementary school you may have been told that there were five: smell, sight, taste, hearing, and touch. This is wrong; even generously granting temperature sensing, pain, and proprioception to touch, and ignoring the less consciously tangible senses like time or the more speculative magnetoception, there is still balance, which is clearly a non-subsumable class on the same level as any of the canonical five.

So how many senses do humans typically have? 6? 11? There are no easy answers and your answer must depend on how detailed you want your classification to be. In situations such as this, a common strategy is to attempt to create a hierarchical classification system. This could mean, for example, that touch would be a superset of temperature sensing, pain, and proprioception, while balance would be a superset of linear and rotational change detection.

At the most basic level of each sensory modality, you might imagine that there could be a single type of neuron that acts as its receptive transducer. For example, since rod cells primarily distinguish the brightness of a visual stimuli while and cone cells distinguish color, it makes sense to consider brightness and color to be separate sense. This system has utility. But even in these well understood systems there will be controversy. For example, inner hair cells in the cochlea of the ear are mechanosensors for the oscillating pressure waves. But there is probably more than one type of inner hair cell, and it is unclear whether they should represent different “senses” (see here and here).

I hope this exercise convinces you that there are trade-offs to any classification system, especially as applied to a many-fold interacting network like a nervous system. So, when we think about neuron typing, we must think about what will be good enough quantitatively for our purposes, rather than hoping for qualitative differences everywhere.

Before you establish any classifier, you will want to be clear about your goals. One common goal in classification is to explain the variance in a system. For example, consider the variance in height among humans aged 0 to 15. One useful variable to explain their variance in height will be age. If we group individuals on the basis of whether they are aged 0 to 3, 3 to 6, and etc up to 15, then we can measure the average within-group variance and see how it compares to the total variance. If our grouping system helps us achieve our goal of explaining variance, then the average within-group variance should be smaller than the total variance.

In neuron typing, the axes whose variance we are interested in explaining are difficult-to-quantify features, such as tonic action potential firing patterns, synaptic vesicle release probabilities following afferent stimulation, and susceptibility to various neuromodulators. Because some of the variance in these categories will arise from unpredictable quantum noise, it seems really difficult if not impossible to find a classification system that will explain all of their variance. If, however, your goal is to identify cognitively relevant information processing steps and you are willing to leave some variance unexplained, then such a classification system should be possible. That’s because the standard set of cognitive operations of the brain is generally considered to make up a classical (i.e., non-quantum) system (see here).

What are the actual classes of variables we could use to explain functional variance? Here are some of the candidates:

1) Morphology. That is, classifying neurons based on the way that their dendrites and axons branch, or the shape of their cell body. For example, Luczak considers morphological models of three very widely studied neuron types, reproduced below. This is a useful way to describe neurons at a high level but may not be very extensible down to lower-level properties. Of course that remains to be seen.

2) Connectivity. How neurons connect to one another is, naturally, a key part of any circuit model. It has been proposed as a way to classify neurons themselves, so I list it here for completeness. And indeed, how neurons connect to one another is likely to be correlated with their functional properties. This is especially true in sensory systems that have a stereotyped pattern of cell type-cell type connections that is genetically programmed to develop in a particular environment. This is certainly the case in the retina; as an illustration, see Kolb’s nice diagram, reproduced below. However, it is unclear whether connectivity patterns will add much explanatory power when considering cell types in regions further upstream from the initial sensory pathways, such as the cortex. 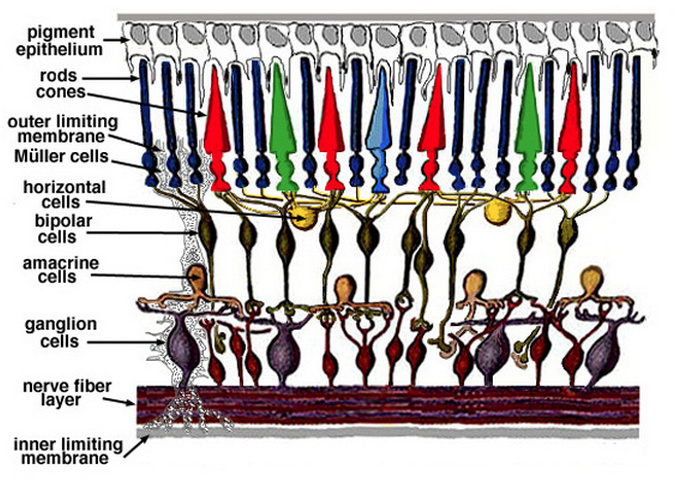 3) Location. There is a common, pragmatic trend to name cells on the basis of the brain region in which they are found. Indeed, “birds of a feather flock together”; location is probably a pretty good proxy for function. In fact, in Swanson’s classification system, reproduced below, cell body-containing (i.e., grey matter) regions are defined on the basis of the neuron types present there. Of course, this can lead to circularity problems.

4) Stereotyped ion channel and pump distributions. The types of ions channels that a certain neuron expresses out of the “zoo” of possibilities clearly has a huge impact on the functional properties of that neuron. So, this merits a mention as a possible candidate.

5) Neurotransmitter type. This is a common way in which neurons are named and typed. For example, think of dopamine neurons or long-range GABAergic neurons. It is for good reason, as neurons with different neurotransmitter types tend to operate quite differently in most circuit models. However, given that around 85% of the neurons in the cortex employ glutamate as their neurotransmitter, this type of classification might not be very specific.

6) Gene expression and chromatin state. Which set of variables specifies the cytoskeletal components (morphology), adhesion molecules (connectivity), guidance molecules (location), transmembrane receptor subunits (ion channel distribution), synaptic vesicle recycling components (neurotransmitter type), and all other sorts of relevant molecules? Obviously, it is the set of variables that control gene expression, including the concentration and location of nucleosome-associated and other scaffold proteins that specify the likelihood of a transcription factor complex binding to a particular region along a chromosome. The primacy of these variables to cell type also makes sense from a developmental perspective, because stem and progenitor cells differentiate into neurons or other cell types largely on the basis of transcription factors and chromatin modification proteins that alter gene expression in a stable, non-DNA sequence-related way. Gene expression and chromatin state is thus the obvious class of variables to type neurons and seems both promising and extensible.

To ground this abstract discussion in a concrete example, consider mitral cells. These cells have a biophysical property called sag potential (also known as h-current), which is “activated by hyperpolarization beyond approximately -50 to -70 mV, does not inactivate, is carried by Na+ and K+ ions, and slowly depolarizes the cell toward its equilibrium potential -30 mV.” The sag potential has an impact on the functional (i.e., input-output) properties of the neuron.

Each glomerulus receives input from olfactory cells expressing exactly one type of odorant receptor. Mitral cells, in turn, can be typed on the basis of the glomeruli that they receive input from. Angelo et al. found that mitral cells of the same connectivity type (i.e., those that connect to the same glomerulus) have less variance in their sag potential amplitudes than mitral cells of different connectivity types. This is precisely our definition of a useful typing system, and shows how neurons can be typed by their afferent connections.

In some relatively less scalable scenarios, you may have access to functional data from each neuron and want to classify them into types. Although firing patterns can change with neuromodulation, development, or disease, this sort of reverse inference procedure can help define loose bounds on how succesful neuron typing using non-functional features might be in capturing functional variance. Brookings et al have a nice example of that here. They studied four neuron types from the well-studied crab stomatogastric ganglion: the pyloric dilator, lateral pyloric, gastric mill, and dorsal gastric. They measured six intrinsic properties of each neuron:

as well as four more novel properties that depended upon perturbing the network environment of that neuron. They then projected these 10 dimensions down to 2 that capture between-class variance the best, and did clustering to try to separate the classes. This was their result: 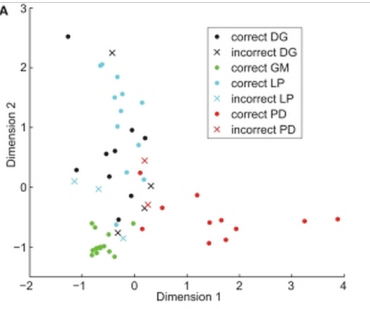 As you can see, they had some success but did not achieve perfect classification even in their relatively simple system. Their data underscores the difficulty of neuron typing.

This paper is a nice summary of the problems in neuronal classification and one attempt to rectify them.

How Many Neuron Types Are There?

Kandel et al’s Principles claims that “there are about 100 distinct types of neurons” (5th ed, Chapter 4, Kindle Location 3801). They do not explain their reasoning, but in the absence of an actual ontology, this nice, round number seems as good a guess as any. NeuroLex lists 247 vertebrate neurons. NeuroMorph lists 63 neuron types with links to their morphology, in all types of organisms.

Why Exactly Do We Care?

The ultimate goal of developing a solid neuron type ontology is that you wouldn’t need to measure the gene expression patterns or epigenome of each neuron in a circuit in order to be able to predict how the circuit generally works. Instead, you could just measure key proxy variables to call each neuron’s type and then measure the key compartment parameters along which that type tends to vary (e.g., number and location of important receptors, position of vesicles and relative number, important signaling pathway statuses). This has obvious utility in rational drug and treatment design for cognition-related disorders.

Siegert et al: Use FACS on retina cells from a variety of mouse lines expressing XFP on a variety of morphologically distinct cell types (ST1). Use transcriptional patterns to define supersets of cell classes in the retina. They define “specificity ratios” of transcription factors for particular cell types. Don’t assay for functional activity, but show that the number of (morphologically distinct) cell types within a class is inversely correlated with the ability to distinguish particular TF’s specific to that cell class (F2C). Indeed, this “negative correlation suggests that the less diverse a cell population, the higher the number of genes expressed only in that population.” Also show that hierarchical clustering based on transcriptomes can divide cells into their independently specified “biologically relevant” classes (F4C). Also some interesting stuff on particular diseases relevant to TF’s in particular cell types.

Hill et al: In their article on statistical connectivity between neurons, they provide a nice example of how one could segregate cell types by morphology. They build a model of a circuit in the neocortex based on realistic parameters, and visualize this by representing different morphological types with different colors.